Tomorrow, 16 December, the Supreme Court will publish its judgement on Heathrow expansion. I have taken the decision to break the embargo on that decision as an act of civil disobedience. This will be treated as a “contempt of court” and I am ready to face the consequences. I have no choice but to protest the deep immorality of the Court’s ruling.

Chris Grayling took his decision to approve Heathrow expansion in June 2018. That was 2 ½ years on from the Paris Agreement. Yet he assessed the climate impacts of Heathrow expansion against the historic temperature limit of 2˚C warming - which the UK Government and the international community had rejected as inadequate and dangerous in 2015. He did not inform the public or Parliament that that is what he did, but it became clear through the disclosure in this litigation that that is what he did.

Had he assessed Heathrow expansion against the 1.5˚C temperature goal in the Paris Agreement, he could not have approved it. According to the Intergovernmental Panel on Climate Change (IPCC), global decarbonisation by 2050 would still leave a 50% chance of exceeding 1.5˚C (even assuming the rapid development of negative emission technologies). According to the Government’s own figures, Heathrow expansion would mean 40 million tonnes of CO2 by 2050, just from UK aviation. Those two figures can not be reconciled.

In February 2020, the Court of Appeal ruled that Mr Grayling should have relied on the Paris Agreement temperature limit (not the 2˚C limit) and consequently ruled his decision unlawful. Boris Johnson informed Parliament that the Government would accept that decision and abide by the Paris Agreement.

But Heathrow Airport Limited, the company which plans to profit from expansion launched an appeal, supported by an army of lawyers. Tomorrow the Supreme Court will overturn the Court of Appeal’s judgement in Heathrow’s favour and rule that Mr Grayling acted lawfully.

As the IPCC has shown, the consequences for humanity of exceeding the 1.5˚C temperature limit are dire, with the younger generation and the Global South on the frontline. Mr Grayling’s hidden reliance upon the discredited, dangerous 2˚C limit to support his plans was a treasonous betrayal of the young people of this country and made a mockery of the Government’s commitment to showing international leadership in the face of the climate emergency, which our Parliament and the UN Secretary General have declared.

The pandemic has reminded us of our subjection to natural laws. The Paris Temperature Limit is all that divides us from a grim future of crisis upon crisis. The Government was right to accept the Court of Appeal’s verdict. The Supreme Court’s judgment, which has legitimised Mr Grayling’s use of the deadly 2˚C threshold, has betrayed us all.

I have been a lawyer for 25 years and a legal adviser to government agencies. I was a Deputy Director at the Serious Organised Crime Agency. I have deep respect for the rule of law and the vital role of the judicial system in holding power to account. That is why it is a duty to protest a decision that so gravely betrays that purpose.

I take this act of protest for the sake of my two children and in memory of all those who have lost their lives on the frontline of the climate crisis, in the UK and around the world. 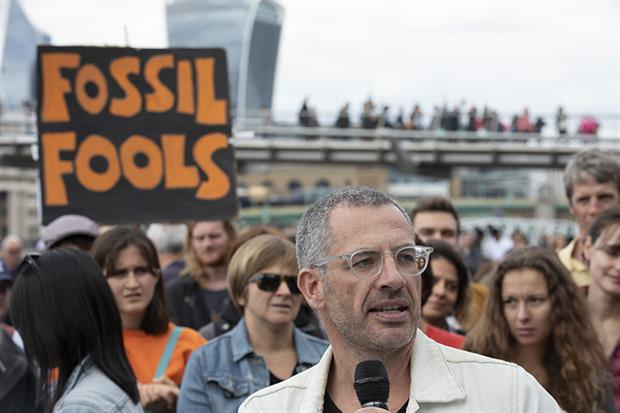