Chemical seas: the rise and fall of salmon pharming in Scotland

The life and times of Allan Berry are entwined with Scottish salmon farming – an industry the 83-year-old citizen scientist has fought since the 1970s.

Salmon farming in Scotland is a rogue industry, 99% controlled by foreign interests. What was, in its early days, sold as a source of employment for local crofters and coastal fishers now bears all manner of ecological sins. Welts of open cage salmon farming circle this once pristine coastline and the sea lice infestations, the escapes endangering wild salmon, the mass mortalities and the vast, choking pollution keep on stacking up.

Behind parliamentary inquiries in 2000 and 2018 is a long history of dogged campaigning by those determined to hold the multinational companies and regulatory agencies to account.

Timeline of a sea farming nemesis

Allan Berry was born in 1937 into the country these monopolising companies’ marketing teams now dream up. From the cleaner waters of Stirling his family moved to north Lanarkshire where air pollution was so bad he could have scraped a waxy grey substance off trees. In school holidays, Berry began diving and exploring the west coast and island sea lochs underwater. His mother bought him a microscope with slides of deep sea samples collected from the nineteenth century research vessel The Challenger. And sometimes, even when he should have been at school in Motherwell, Berry stayed up in the hills or the clearer air around the library, where he developed another eye for detail. “I got into the habit of looking things up, challenging things.”

Unilever was quick on the scene in the 60s. Its then subsidiary Marine Harvest (now the notorious Mowi) first produced farmed Atlantic salmon from Loch Ailort in 1971. Five years later Berry – after years travelling and selling plants for cleaning up polluted water – embarked on the business of oyster cultivation in Loch Sween on the west coast of Argyll. His company bought its seed oysters from Loch Creran, the only hatchery in Scotland. It was an optimistic, sustainable enterprise, but warning signs started soon after.

In september 1980, parts of sea lochs in the north of the Firth of Clyde turned red. The cause was a toxic algal bloom: specifically, a burst of phytoplankton spurred by an excess of nutrients in the water (known as eutrophication). Water containing the red tide was pumped into fish ponds at a salmon farm in Otter Ferry, Loch Fyne, killing 3000 salmon in one pond. The ecological event rang alarm bells for Berry, who had studied toxicology and believed the waste from salmon farms – the ammonium in dissolved nutrients from their faeces, and nitrogen excreted through their gills – was being perilously underplayed. When he crossed Loch Fyne in his sea canoe, Berry saw the dense red bloom petering out along the shore by the salmon tanks. But an insurer and government-funded study in 1982 did not consider the discharge from salmon farming, instead pointing to freshwater run-off from the land. He has followed its paper trail closely over the years and says: “it’s still being used to justify all the literature that doesn’t have any indication that damage occurs from salmon farms.”

Back in 1984, Berry was contending with the other major element of salmon farm pollution: the “colossal amount of chemicals” that companies pour into the cages to treat diseased salmon. The oyster hatchery he depended on was ruined by the effects of TBT – a (now banned) anti-foulant used by the loch’s salmon farm. So he took up the mantle, building a new nursery in Loch Sween to maintain the supply of disease-free oyster seed. Then the salmon farms started piling in, and appeals to keep toxic TBT out went ignored: “I became taboo, I was an enemy holding it back they felt – I got treated terribly by them.” After waves of degrading water quality, whilst the amount of farmed fish in Loch Sween increased dramatically from 70 to 560 tonnes within a three kilometre radius of the hatchery, the oyster business went under in 1991. Unable to get compensation and frustrated by the toothless response from regulatory bodies, Berry dedicated himself to cleaning up the industry. 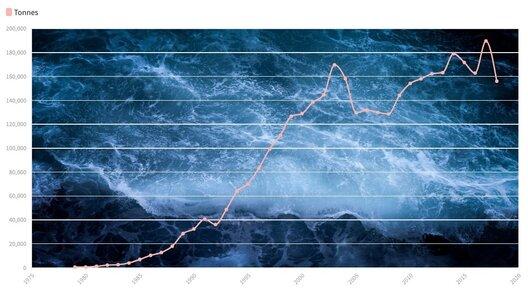 The tenacity of anti-fish farm campaigners has its counterpart in the persistent passivity of those they hold responsible. In the 90s, whilst the salmon industry gravitated towards its current monopoly, Berry delved into research, connected with campaigners and scientists around the world and gathered 400 letters for his petition submitted in 2000: request for an independent, objective inquiry into environmental impacts of sea cage fish farming.

He didn’t get one, not fully. Instead a rolling inquiry began in 2001, with Berry told he had no place there, and “jobs come first.” Evidence was presented by scientists who were – on their own admission – no experts in the field of waste disposal and algal blooms.

“Allan Berry was concerned that the large quantities of waste material that are produced by this enormous industry were affecting algal growth in lochs and perhaps more widely. I know nothing about that issue, but it worries me a great deal because of the scale of the industry. [...] If there is no link between the outbreaks and the salmon farming industry, that is all well and good—the industry can continue to expand and we can grow lots of halibut, which will create the same problem of waste disposal. However, if history shows that there is a link, we have a great deal to worry about.” – Dr Richard Shelton at a Transport and Environment committee meeting 25 March 2002

Berry had appealed on the balance of probabilities (the standard of proof required in Scottish civil courts) and precautionary principle. Though Dr Shelton favoured a moratorium on expansion, other scientists talked the pollution problem down and the science on harmful algal blooms was allowed to remain murky. There would not be another significant inquiry into environmental impacts until 2018, in response to the industry’s plans to double production by 2030 to up to 400,000 tonnes. 2018 inquiry: “Secrecy is poison in these discussions”

Award-winning wildlife filmmaker John Aitchison gave evidence to the committee in 2018 in his role as chair of the Friends of the Sound of Jura (a group that formed in resistance to a fish farm proposal in the biodiversity hotspot two years earlier). “Secrecy is poison in these discussions,” he told the room at one point, stressing the need for open data on sea lice. The language of transparency and hygiene go hand in hand, and it is the health of Scotland’s wild fish and precious marine environment that is at stake.

It is self-evident that “pollution is the physical expression of corruption.” So what to make of the fact that fish farming is the biggest polluter of the sea in Scotland? Dissolved nutrients make up 90% of the waste, and yet the Scottish Environment Protection Agency (SEPA) seems blind to its corrosive impact. Aitchison commented: “No other farming industry is allowed to dump its pollution for free into rivers or anywhere else. If you had the amount of waste produced by a fish farm on land, and piped it into exactly the same spot in the sea as all the cages, you’d be disqualified from farming immediately. It would be illegal under SEPA’s rules.” Transparency as a tool for change

Scotland’s freedom of information (FoI) laws are strong according to Don Staniford from Scottish Salmon Watch, a man who has made them his bread and butter. Over the years, he has forced disclosures of data on the killing of seals; revealed that SEPA made zero prosecutions in over a decade; and chalked up instances when employees left SEPA and joined the industry on better pay – classic examples of gamekeeper turned poacher. The conflict was already internal, since promoting economic growth has been an official part of the regulator’s remit since 2014. In a sequence well documented by investigative site The Ferret, Staniford exposed how – despite studies showing the pesticide emamectin benzoate was lethal to crustaceans – SEPA bowed to industry pressure and withdrew its proposed ban.

So the green watchdog was under the spotlight in 2018. The resulting report found that tougher sanctions for fish farm escapes should be introduced; that closed containment and alternative technologies should be explored; and concluded: ‘the regulatory tools currently available to SEPA are neither adequate nor effective.’

Formaldehyde, biotoxins and the climate crisis

Seeing the report’s recommendations implemented is another matter. Last month a Mowi fish farm containing more than half-a-million salmon was damaged during a storm, causing an unknown number to escape. For wild salmon, this was “the ecological equivalent of an oil tanker running aground,” said campaigner Corin Smith. It’s unclear if and how the multinational will be sanctioned. Then there’s the creeping use of formaldehyde to treat diseased smolt (young salmon) in freshwater lochs. Residents at Loch Tralaig in Argyll are suffering crippling headaches caused by the large amounts of formalin they see being poured into open cages by workers in gas masks. A staggering amount of dead fish are emerging from the Kames fish farm.

Has Berry’s theory about waste and harmful algal blooms (HABs) been kicked into the seagrass? Aitchison thinks it's true in some places, in smaller enclosed waters like the upper bit of Loch Fyne. For signs of toxic blooms, scientists often look to satellite images showing patches of chlorophyll-producing phytoplankton. But if some HABs are caused by marine bacteria, as Berry believes, then there won’t be any extra chlorophyll to detect. Climate change hovers above the eutrophication debate, demanding urgency. Examining and mitigating the impact of ocean warming also falls to SEPA, and Aitchison is clear that far more needs to be done here.

Transparency is improving but simply shining a light on the host of salmon farming ills is not enough. Lex Rigby, campaigners manager at vegan charity Viva! said: “As an industry that relies on the capture of wild fish to feed its vast stocks, it is truly damned from start to finish.” “In my job I’ve been all over the world filming wildlife,” says Aitchison, who has Planet Earth II to his reel. “Very often we’ll go to the best place for a particular species or spectacle of some sort – whether it’s wildebeest, or bald eagles catching salmon in Alaska, or bears. And I come home to Scotland and I know that it compares to those places and it has in the past compared even better to those places. The west coast of Scotland and the northern isles – where all the fish farming happens – and the Outer Hebrides are among the most beautiful coastal places in the world, with diverse, important populations of wild animals. And Atlantic salmon is one of those. It’s an iconic thing for Scotland.”

Passion for the noble salmon, swimming upstream, leaping the falls to its river of birth, powers the campaigners. Over decades fighting for objective scrutiny of the industry, there are many moments for Allan Berry to reflect on. A poignant one is the time he summoned a meeting of scientists at Dunstaffnage Marine Laboratory in 2004, after his petition was over, to ask where his science was wrong. He recalls “40 odd people, sitting looking up at the ceiling, not a soul could even look me in the eye.” And drove the 80 miles back home with that ringing silence.

Last week Berry, writing his latest report, told me with a glint in his voice that he has a new descriptive phrase:

The policy of our government on the salmon feedlot industry is dictated by a Norwegian Oligarchy.

Ecohustler is part of a coalition of organisations calling for a halt to the expansion of salmon farming in Scotland.

Delay tactics - when will the salmon industry clean up its act?