June 1st marks 10 years since the passing of philosopher and ‘geologian’ Thomas Berry, who coined the term ‘Earth jurisprudence’ (EJ) to describe the laws that govern life on Earth and how humans can live in a mutually enhancing relationship with Nature.

Liz Hosken, Director of The Gaia Foundation, reflects on Berry’s legacy, and the critical need to reconnect with Nature and her laws as an antidote to the separation, superiority and destruction wrought by the industrial growth economy.

By rooting ourselves in this reality, we deepen our sense of moral responsibility to rebel against forces of destruction and restore human ways of being that are life-sustaining. What is Earth Jurisprudence?

“Any activity that undermines the wellbeing of the Earth, ultimately undermines our own human wellbeing.”

Jurisprudence is the legal philosophy that underpins constitutions and laws. As a term, it goes beyond narrow conceptions of the law. It is about how we live and govern our lives in their totality.

The current dominant legal system is largely based on laws developed during the industrial era to serve the interests of colonists, industrialists and corporations. These laws are used to legitimise extraction from Nature for commercial interests over maintaining the good of the whole - the health of our living planet. They are underpinned by a worldview that affirms human dominion over Nature, reducing her to a bunch of ‘natural resources’ to be exploited.

Earth Jurisprudence is a different philosophy of law and of being the world. It recognises that we are born into a lawful Universe, of which our planet is a part, and that human law needs to be derived from Earth law if we are to live in harmony with our home planet.

As a species in the web of life we are subject to Nature’s laws. These are non-negotiable – they govern the way life works on our self-regulating planet. When we break these laws- for example, when we dig fossil fuels out of the body of our Earth which living processes have stored to maintain the chemical balance of the atmosphere – there are consequences. Climate changes because we have destabilised the Earth’s processes. 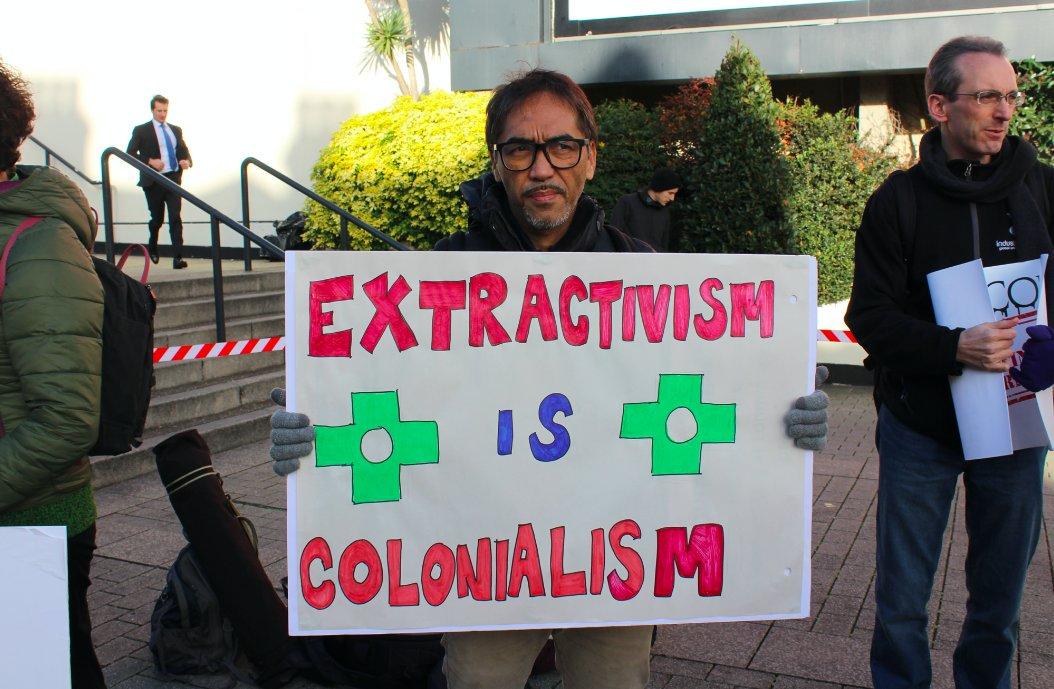 For the first time in Earth’s evolution, one form of human ‘civilisation’ has colonised the planet, breaking her laws through endless extraction to create endless profit and (un)economic growth for a tiny minority.

In the face of this onslaught on the whole Earth Community (including humans, especially of Indigenous and land-based cultures), Thomas Berry encouraged us to recognise that, according to an Earth jurisprudence worldview, every being and element of the Earth has an inherent right to exist, the right to habitat and the right to participate in evolutionary processes.

This idea has inspired action, for example in the form of the growing movement to affirm the Rights of Nature; to name and challenge the Ecocide which the industrial growth economy has brought about in less than a century. This movement seeks to hold individuals and corporations responsible for the co-violation of Nature and human beings’ interconnected rights. Where does Earth Jurisprudence come from?

The term Earth Jurisprudence was proposed by cultural historian Thomas Berry to name the source of law that governs life on Earth. Berry saw Earth Jurisprudence at the heart of making the shift from the period of destructive human domination of life to what he called the ‘Ecozoic Era’, where humans once again live in harmony with Nature. He wrote:

_ “The transformation of the western industrial institutions of religion, education, governance and politics from anthropocentric preoccupation to an Earth-centred understanding of our role and responsibilities as humans, embedded in the larger Earth community.”_

However, Thomas Berry was also clear that Earth Jurisprudence is not a new philosophy or practice. There are two ultimate sources of inspiration for understanding EJ and where it comes from.

The ‘primary text’, as Berry put it, is Nature herself. For most of human history we have understood that we are born into a lawful, self-regulating and living system we call Earth, Mother Earth, Pachamana, Gaia. We are inextricably part of the web of life and as such the laws we must comply with, that we must live by in broad terms, are the laws that govern life on Earth. This engenders in us a new worldview- an understanding that life is a communion of subjects, not a collection of objects, as the industrial world proclaims.

Indigenous and non-industrial societies who govern themselves according to these fundamental ecological laws and codify them in their institutions are the second inspiration. Through them we can see how it is possible for humans to live and thrive whilst maintaining the dynamic equilibrium upon which the health and the wellbeing of all depends.

As, Ailton Krenak, an indigenous leader from Brazil, said: "We hold the memory of what it means to be human … I think people should pay close attention to this. Even if we had all the white people’s technology and money, we would be worth nothing if we did not hold the memory of the creation of the world, our planet."

As we self-examine and try to transform our own societies it is essential to stand in solidarity with those indigenous communities on the frontlines of pitched battles to protect Mother Earth.

Why is Earth Jurisprudence important now?

“Climate change and the unravelling of our ecological life support systems is the inevitable consequence of systematically breaking the laws that govern life.”

We live in a time of emergence and emergencies.

The fabric of life on Earth is thinning, with over 1 million species in imminent danger of disappearing forever in a ‘sixth mass extinction event’ – the first ever caused by a species, humans. It could take Earth between 3-5 million years to recover from this destruction of diversity.

The loss of the biodiversity that helps regulate our climate is accelerating global climate instability as we fail to reduce emissions quickly enough. Societies around the world are showing the strain as right-wing governments rise and conflicts escalate as both result and cause of mass movements of our fellow human beings.

Climate change and the unravelling of our ecological life support systems is the inevitable consequence of systematically breaking the laws that govern life- of taking more than Nature can replenish, of digging up what Earth has buried, manufacturing products she cannot re-integrate and dumping the ‘waste’ where it does not belong

In response, courageous new movements are emerging. Extinction Rebellion have taken the streets in the UK and elsewhere; the School Strikes for Climate have spread across the planet, as the children who are dumped with the legacy of the industrial boom of the last century, call politicians and corporations to account; and from Uganda to New Zealand Rights of Nature movements are affirming the recognition of the inherent rights of Nature to be, to habitat and to participate in evolution.

At this time, Thomas Berry and Earth Jurisprudence offer us powerful medicine. They emphasise the foundational importance of reconnecting with Nature expanding our compassion and understanding to embrace all of Nature in her beauty. This is about “coming back to life” as another wise elder, Joanna Macy, puts it.

The urgency of this time requires us to root our resistance and our alternatives deeply in a recognition of Nature’s own laws to avoid shallow, false solutions to our crises. The more we reconnect with the living world, the web of life that sustains us all, the greater our sense of moral responsibility becomes to protect life, to hold power to account, and to walk our talk – to be the change we want to see. As Gandhi said, once we are aware, this becomes a moral imperative, together with proactively building alternatives.

The young leader Greta Thunberg reflects this growing consciousness, which she has awoken in others too. As she has said, we need to listen to the Earth, and the science telling us about her ailments, first and foremost.

Young people, faced with a diminishing world, are instinctively standing in solidarity with Mother Earth and calling the rest of us to do the same – for life’s sake!

What does a future in which we embrace Earth Jurisprudence look like?

“We can recover a mutually enhancing relationship with the wider Earth community.”

When we see life from an Earth-centred perspective, as Thomas Berry did, as Indigenous Peoples do, we are compelled to take responsibility for protecting life, for following Earth’s laws in whatever we do and collectively re-shaping the institutions we encounter to comply with Earth’s laws and hold power to account as a moral duty of care.

As many Indigenous People say – when we experience ourselves as inextricably part of the web of life, the law is written in the heart. We cannot violate life, nor can we witness others doing so without feeling compelled to take action.

Once we feel ourselves as a cell in the living body of Mother Earth, we return home to being held by the laws that govern life, in recognition of Earth’s primacy in all our decision-making and governance systems.

Thomas Berry believed that by salvaging our greater ecological selves we could build the critical mass to transform the world dominated by corporate control which is holding life to ransom, and hence aid its inevitable demise – as we rebuild mutually enhancing alternatives.

“Peace is the result of this recognition of the Earth and the common sense of togetherness that she creates among us all”, wrote Thomas. “She underpins and unites all regions, economics, education and the laws, which govern our lives. The challenge is to change our thinking from a humanistic perspective to an Earth-centred perspective. Through this change we can recover a mutually enhancing relationship with the wider Earth community.”

At a time when chaos and confusion prevails and hope is in short supply, standing firmly in solidarity with our larger Earth Community is the way back home to who we really are.