Doppelgangster - activating young people as agents of change through theatre-making In the dark days of the Cold War, the spectre of nuclear apocalypse posed the greatest existential threat to humanity. Everyone, it seems, was ducking, covering and stocking their basements with tinned food, in preparation for that single outburst of anger - that one dramatic lapse of judgement - culminating in an all-encompassing, merciless, and exciting bang! In response, artists from Warhol to Kubrick, and Meyer to the Sex Pistols, took their worry, fear and anger and used it as a catalyst for change, innovating through art, music and film; giving the shadowy figure of nuclear war a recognisable face and offering audiences a taste of what their future might hold.

While the anti-nuclear movement has been placed on an artistic pedestal in popular culture, the climate crisis hasn’t quite found It’s footing, despite the earnest efforts of Extinction Rebellion, BP or Not BP and other climate activists. Maybe it’s because the end of the world no longer carries the thrill of humanity jumping off a cliff. Instead, we’re rolling slowly down a slope, everyone waiting for the person next to them to pull the handbrake. Maybe the mystery of when and how has gone. With melting ice caps, natural disaster and extinction on every screen, it is becoming increasingly apparent that the world won’t end with an elaborate jazz solo, but a few distant coughs over TV static.

Nobody understands this better than the award-winning neo-punks Doppelgangster, whose latest project Choke Me treats the audience to a talented cast of young artists, coupled with a noxious setting akin to a London Pea Souper. The Sheffield/Melbourne based production company are known to pull no punches in addressing climate issues, with their previous work TREEFXXXERS presenting private contractor Amey as a sex doll during the Sheffield tree felling scandal last year. If you were to describe their current play in a few words, it would be ‘The Air’s Polluted, Everyone Dies’, which sums up the kind of ride this performance offers. When you are handed a facemask and ear plugs on entry, you’d be daft to expect anything less than a brutal assault of the senses. The post-dramatic nature of the performance is the antithesis of comfort and escapism, never giving you a moment to drift; instead, slapping you awake at every opportunity. The audience were heavily incorporated into the performance and held important roles, shouting ‘Die!’ along to a children’s poem, having inflatables thrown at them by the agitated cast, and playing the Void itself. In all its barminess, insanity and profanity, Doppelgangster’s theatrical style is purposed to ground you in reality and force you to come to terms with it, whether you want to or not.

And what better city to ground your senses than Sheffield. The Steel City is still plagued by its air pollution record, which has once again come to the forefront of discussion this year as part of a city-wide consultation about air quality. With pollution levels twice the legal limit set by the World Health Organisation (WHO) there are five hundred related deaths a year in Sheffield alone. The worst affected areas harbour health risks equal to passive smoking. Given that Sheffield is one of forty-seven cities currently at, or to have exceeded, WHO limits, it’s no surprise that more than half of all heart and lung related deaths in the United Kingdom stem from air pollution.

The soot-encrusted jewel in the crown of Doppelgangster’s latest production is the portrayal of inaction in the face of death. A woman sits in her bath and complains about the loss of the Internet. Two police officers argue over the maintenance of authority in a world that already has one foot in the grave. Meanwhile, the fog steadily increases in intensity until it consumes the whole set. It is obvious that the production targets more than air pollution, or even Sheffield for that matter. Instead, it identifies a top-down system of distraction, corporatism and the loss of control by the old institutions at both a local, national and international level.

Reminiscent of last year’s warning from the United Nations that twelve years sit between us and unsalvageable damage to the Earth, the chronology of Choke Me counts down “twelve years until the end of the world”. Five clocks hang at the back of the stage, all set at five minutes to midnight: strangely, a more generous prediction than the current time set on the Doomsday Clock, which itches impatiently on 11:58. Condensing twelve years into sixty minutes is a feat only truly possible in theatre, and through this visceral form Doppelgangster hammer home that the luxury of time is no longer with us.

When the twelve years are up, the audience are cast as “The Void”. Their lines projected in front of them as they discuss the end of the world with Death and Mother Nature - Gaia - who is described as a ‘stripper and single mother’. While the latter is just happy mankind is dead, Death is insistent on having one last crescendo moment with the audience before we are consumed; a grand ritual that would at least allow humanity to go out with a ‘bang’. Maybe this is an enactment of mankind’s last attempt to take control of its fate, which ultimately passes it by. In this way, Doppelgangster urges its audience to be a driving force for change while it still matters. There are five minutes left on the clock. There is still time!

Choke Me is, pardon the pun, a breath of fresh air in a city where supply is scarce. Dr Tom Payne, Co-Founder of Doppelgangster, described the aim of Choke Me as a push to “activate young people as agents of change through theatre-making”, and with a magnificent ensemble of students from Sheffield Hallam University, it is a startling example of how art can be used to engage in a cultural movement which desperately needs to sharpen its teeth and grow its claws. If we are going to go out, it should at least be with a sense of awareness, a call for change, and a good deal of yelling. 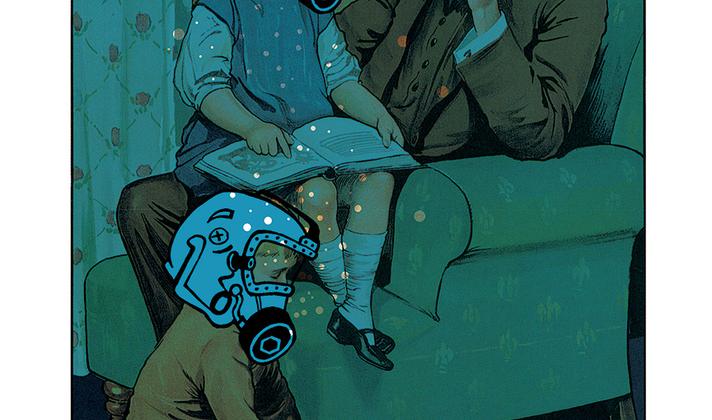 Daddy, what did YOU do in the climate war?

The Art of Protest - featuring more than 100 iconic posters, book charting more than a century of social protest